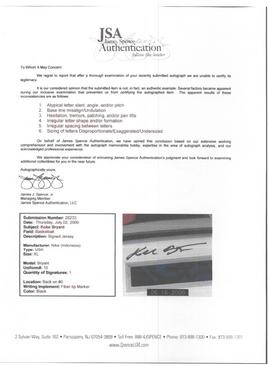 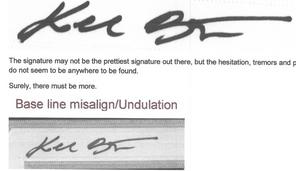 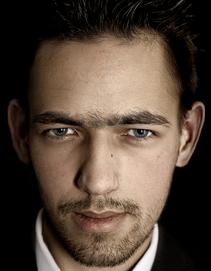 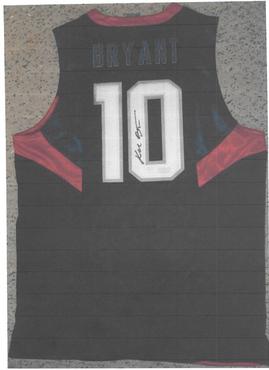 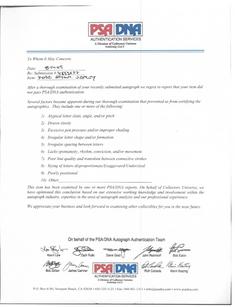 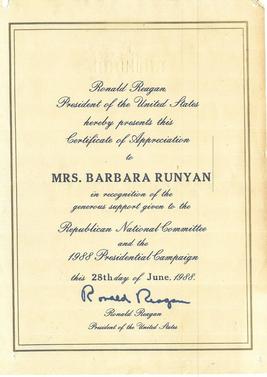 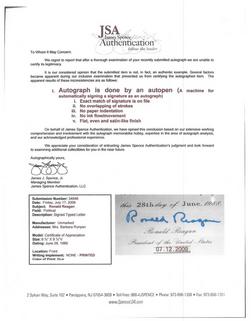 Our associate brought this piece to JSA. It’s a 2008 USA Men’s Olympic Basketball jersey signed by Kobe Bryant. Maybe the problem with the laser prints and the witnessed photo was that JSA is not familiar with Presidents, baseball players or football players. Could that be it? Would they do better with a basketball player?
t seems that the Kobe Bryant jersey is a fake. Or at least JSA has reported it to be a fake. How did JSA come to this conclusion?

Okay. Now we understand.
What’s wrong with the Kobe Bryant signature? Many things, including:

The signature may not be the prettiest signature out there, but the hesitation,

tremors and patching do not seem to be anywhere to be found.

Surely, there must be more.

The signature appears on the number on the jersey. We cannot find this base

line that JSA keeps mentioning, but the signature does seem reasonably well

positioned between the borders of the jersey number. We’re not sure why

a signature is not supposed to undulate.

With JSA’s stated “expertise” and “professional experience”, shouldn’t we assume the piece must

be a fake? How could this be? According to the paperwork that came in the box with the jersey, it’s an Upper Deck limited edition piece. There were 100 jerseys signed. In fact, this one is numbered 14/100.
Like Fan4Ever, Upper Deck sells not only the autograph, but also the signing process.

All of the Upper Deck pieces are signed in front of witnesses. Surely the witnesses know what the

signer should look like, and would not be fooled by a substitute. With that in mind, what about JSA’s findings? Where was the
Since the Upper Deck certificate indicates that the piece was signed by Kobe Bryant in front of witnesses, shouldn’t the letter slant, angle and/or pitch be considered typical of Kobe Bryant’s signature? Shouldn’t the characteristics of Kobe Bryant signing his own signature – in front of witnesses – be considered typical every time? The 14th time out of 100?

Irregular for whom? Since Kobe Bryant signed the piece in front of Upper Deck witnesses, shouldn’t

What did JSA compare it to? Someone else’s samples?
If JSA compared it to known samples from Shaquille O’Neal, this signature would look irregular.

Is that what they did? Is there any explanation for any of this?  Once again, we hate to leave

questions unanswered. When our unsuspecting dealer visited with PSA/DNA, he had the Kobe

Bryant jersey. What did PSA/DNA do? Is anyone else getting tired of asking the same questions

over and over again?

Once again, PSA/DNA followed the leader. PSA/DNA failed yet another witnessed piece. After

passing all of those laser copies. Like JSA, PSA/DNA had all sorts of issues with the signature,

among them: Excessive pen pressure. With a Sharpie. On the stiff surface of the jersey number.

Since the jersey number’s surface is harder than the tip of the pen, how could any pen pressure

with a felt-tip pen be deemed excessive?

Once again, Kobe Bryant signed the jersey in front of Upper Deck witnesses. Shouldn’t any characteristics of his own signature – when signed in front of witnesses – be considered regular?

What did PSA/DNA compare the witnessed signature to? Larry Byrd samples? Michael Jordan

samples? Is this signature irregular for an NBA star? What exactly is irregular about this witnessed signature? Does it have characteristics that are different from Kobe Bryant signatures that have not been witnessed?

Let’s sum up what we know so far.
JSA seems to love laser prints.
PSA/DNA likes to “follow the leader” and passes the same laser prints.
JSA does not seem to like witnessed signatures. Apparently, they lack the natural quality of

they lack the natural quality of laser prints.

By this time, as you can probably guess, we have spent a lot of money for authentication.

A LOT of money. We certainly do not feel like we have gotten much of a bang for our buck.

Have you seen what JSA and PSA/DNA charge for work of this caliber? Yipes. At the point of

being repetitive, we spent a lot of money. We do not think we got much for it. At least not much

So far, our results indicate that we have both JSA’s and PSA/DNA’s blessings to sell lovely laser prints. Unfortunately, neither JSA nor PSA/DNA gave us the same blessings to sell witnessed pieces. Who wouldn’t prefer a nice laser print, anyway?
We decided to conduct one last test. We decided to see if JSA had any chance of identifying a real piece from a fake. Were the previous results just the effects of quite a few bad days?
In the interest of cost savings, we decided to limit the last test to JSA. After all, we think we already can guess what would happen with PSA/DNA, since they matched JSA 100% in passing laser prints and 100% in failing witnessed signatures. Did we really need to spend even more money? If you want to give PSA/DNA the benefit of assuming they would differ in any way from JSA on this one last piece, in spite of all the results, feel free. We’ll leave that up to you.

We took this piece to JSA.
Finally, after all of those passed laser prints, JSA’s failure ratio improves. Their reasons?
They had one main reason, which they supported with some side issues.
According to JSA,
We do not know what is or is not in JSA’s files. Apparently, a lot of things with similar pen pressure. However, if one considers the very nature of an autopen signature, it is a replica of an original signature. If it were ink instead of a facsimile, it would likely be an original. JSA is stating that this signature looks like genuine Ronald Reagan signatures because it is a replica of an original signature. That’s really interesting, considering their other reasons, which follow.

What are their other supporting reasons?
Once again, here is the Ronald Reagan signature. There is a slight overlap in the start of

the second capital “R”. Other than that, there were never any overlapping strokes in

Ronald Reagan’s signature. Does that mean that this signature is a forgery because it lacks

features that never appeared in Ronald Reagan’s signature? Is JSA kidding?
We’ll get to that one in a bit. But first, the other issues.

The signature appears to have been executed with a Sharpie. The paper is a stiff, thick paper.

“inclusive analysis”, or did they miss this, too, like they missed the little laser print thing on

Take another look at the signature. Even with the naked eye, it certainly looks like the ink has spread out or bled. How can ink spread without flow or movement?
Even more significantly, look at the back of the document.
What do you see? An autopen signature is like a printed signature and is the same as printed

How can a document have ink bleeding through the paper without ink flow or movement?

Try writing on paper with a Sharpie. It bleeds through most papers. Try printing with your

printer, which is like the autopen process. Things don’t bleed through. Anyone see the

bleeding that went through the paper in the above picture? We do. Do you? Why didn’t

If the bleeding through the paper can be seen with

the naked eye, how was it missed in JSA’s “inclusive

Is JSA referring to the parts of the signature

that clearly show bleeding and spreading out

of the ink? Is JSA referring to the indentations that can be felt when one runs a finger over the signature? If it were not for the photo on the JSA certificate, we’d probably assume they must have been looking at and talking about a different piece. Sadly, JSA was not.

The results that we have gotten when we have employed JSA’s and PSA/DNA’s services certainly question why the auction houses and any of the above-listed companies would use their services. It certainly seems to defy logic.

Neither JSA nor PSA/DNA seems to be able to tell real signatures from laser prints.

Does that make them real?

JSA’s own website and submission form make it clear through the use of a disclaimer what the company intends to do, or not do, concerning the opinions in their reports. “Certification and authentication involves an individual judgment that is subjective and requires the exercise of professional opinion, which can change from time to time. Therefore, JSA makes no warranty or representation and shall have no liability whatsoever to the customer for the opinion rendered by JSA on any submission.”

Think that’s bad?Why would anyone want to hire a company that tells them up front that the company will not stand behind its own work? Would we accept this from any other profession? A doctor? A plumber? A mechanic? Not likely. Why is this the acceptable standard for memorabilia?

PSA/DNA’s own website and submission form also make it clear through the use of the same disclaimer that the company intends to run away from the opinions in their reports as quickly as JSA. “Certification and authentication involves an individual judgment that is subjective and requires the exercise of professional opinion, which can change from time to time. Therefore, PSADNA makes no warranty or representation and shall have no liability whatsoever to the customer for the opinion rendered by PSADNA on any submission.”

Considering their results, it’s easy to understand why JSA and PSA/DNA do not want to stand behind their own reports. They’re just two peas in a pod.